How to visit Petra, Jordan 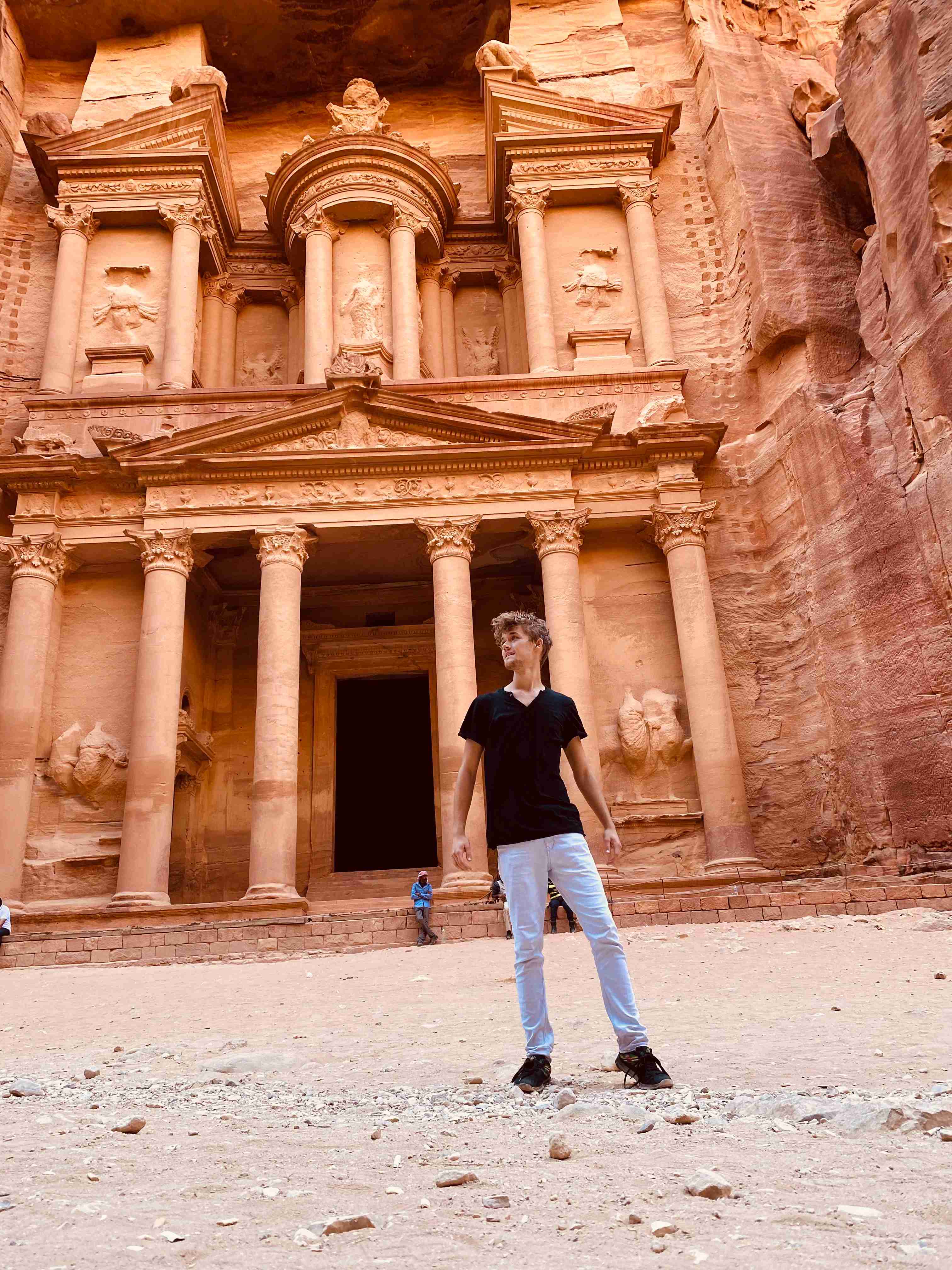 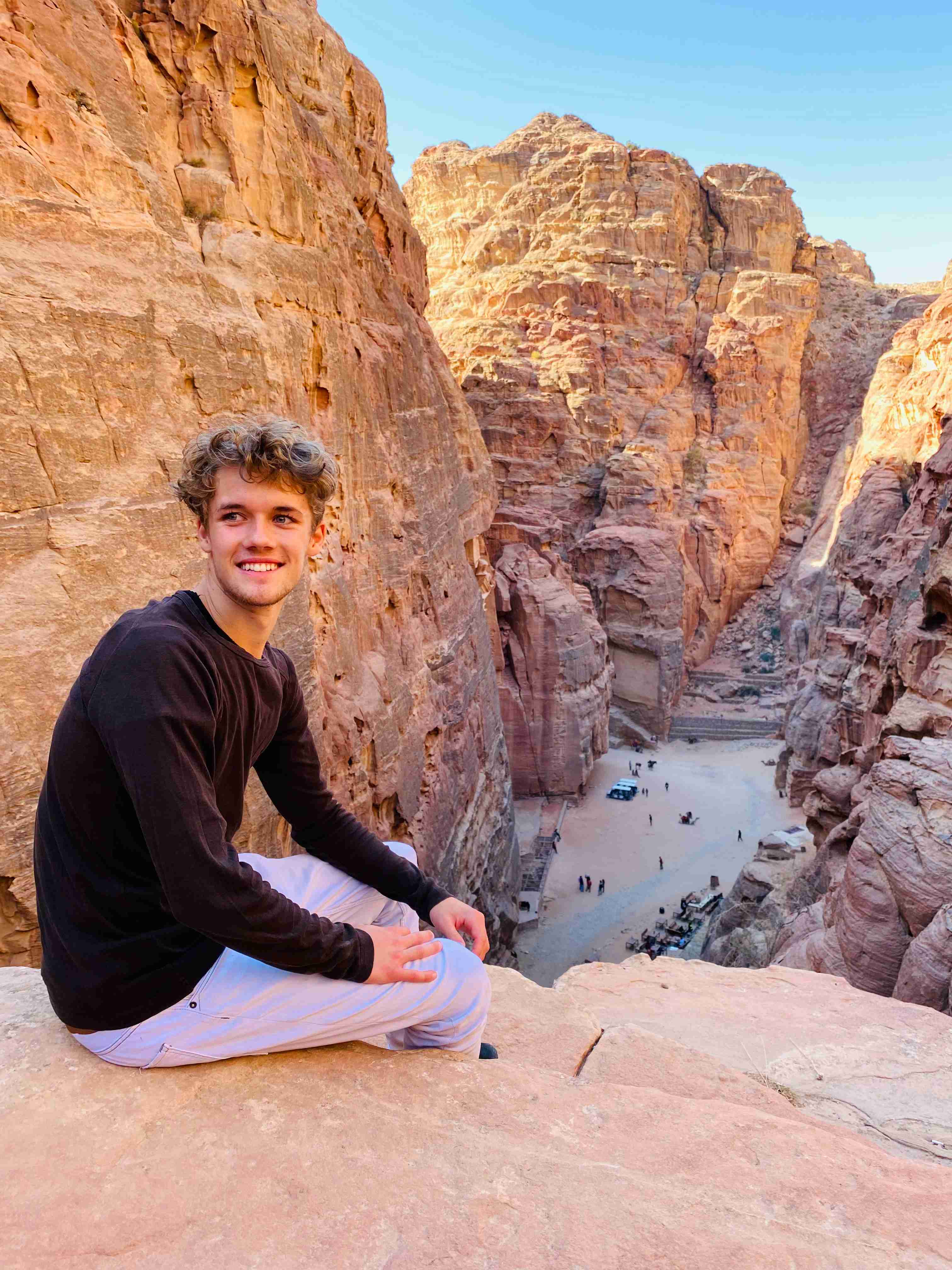 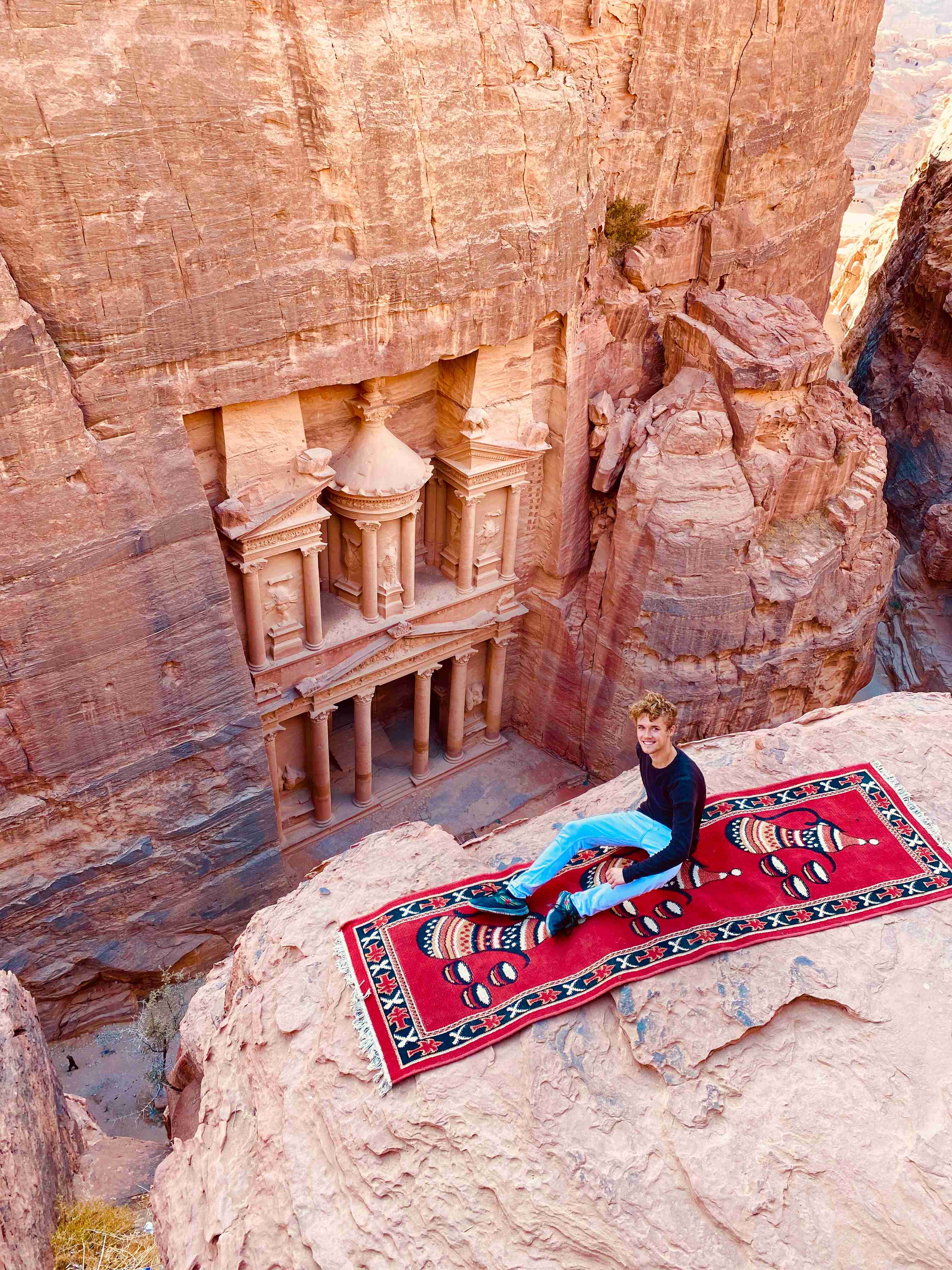 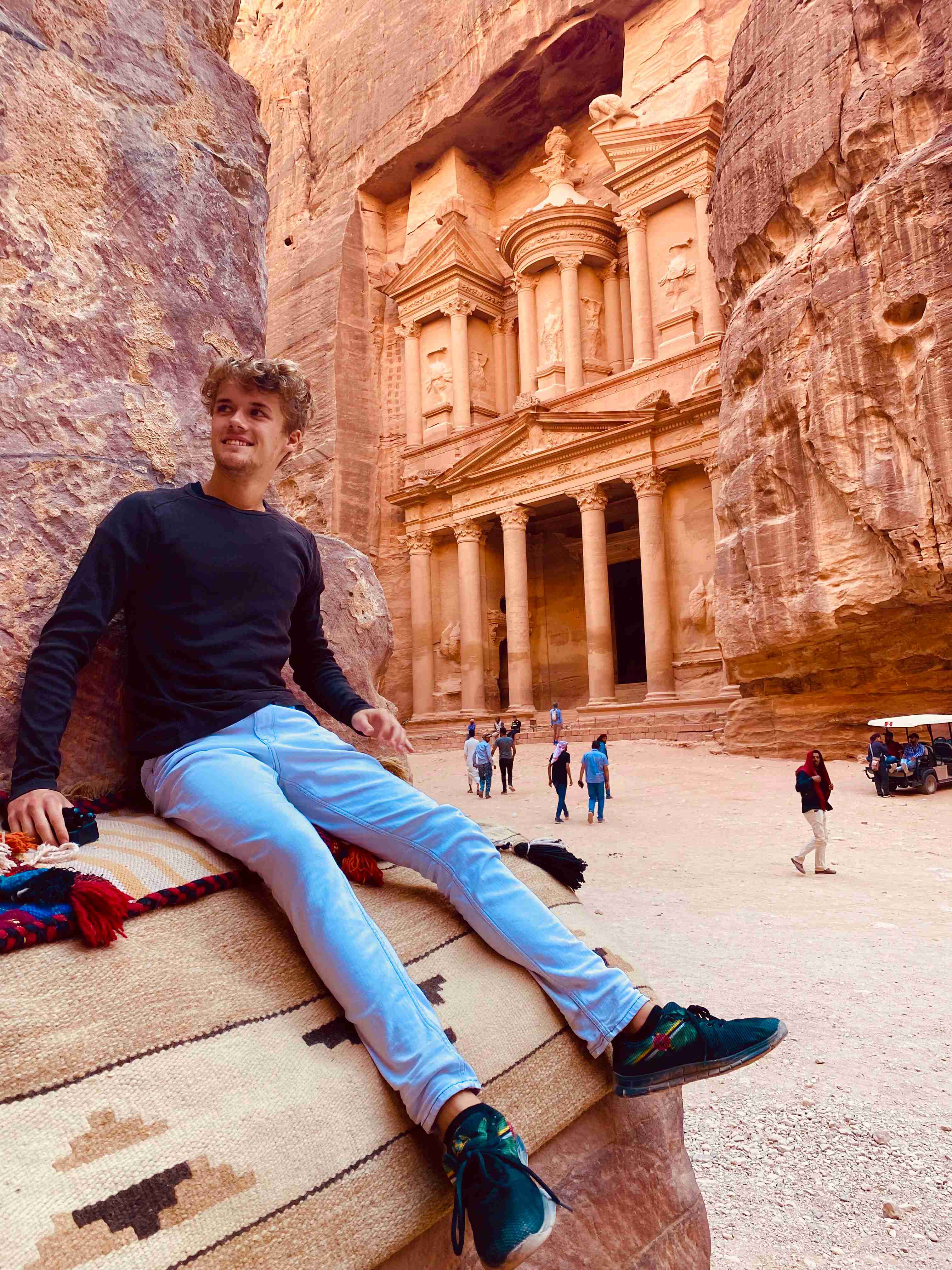 How to visit Petra, Jordan

I am sure you have all heard about Petra. It is one of the 7 New Wonders of the World and certainly a lot more than just “The Monastery” that we all know from Instagram pictures. Let that sink in:

It is an area that is impossible to see within just a couple of hours. Even 4-5 hours is too short if you want to see most of it. There are so many hidden gems along the hiking/walking paths that are amazing to take pictures for and to just wander around. So rule number 1 when visiting Petra: START EARLY! There is a JETT bus that leaves from Amman to Petra once per day at 6:30am. Yep, you heard it right – 6:30am. Two problems here, despite the early time. Firstly, it is expensive (more expensive than local busses, more on this later). And secondly, it is in fact the only Jett bus that leaves for Petra. There is a returning bus to Amman at around 5pm.


When planning to visit Petra, you basically have 2 options:

Now, if you are a rather adventurous person (like me), you might prefer the local bus option. The system works similar to that in South Africa and many other African countries: you arrive at the bus station, try to find the bus, you sit down in the bus, the bus WAITS until it’s full OR until the driver feels like starting the journey and hopefully within the first 3 hours, you depart. There are no fixed schedules for these busses in Jordan, however locals know when a bus starts filling up. It is indeed quite comparable to places like the Taxi Rank in Johannesburg, South Africa.

The local busses from Amman to Petra leave from the South Bus Station of the city. The first bus starts filling up at 8 or 9am. Take this one, as it is the only chance to see Petra properly in daylight hours (unless of course you purchase a 2-day ticket). I had to wait until around 11:30am until the bus started it’s journey towards Petra. Very much to my own surprise, I had to pay 7 JOD ($9,84) for the local bus ride even though I ordered the ticket in Arabic. That barely makes it cheaper than the JETT bus. Although I heard other tourists getting the ticket for as little as 3 JOD. So hands down, if you want to see something and don’t feel like wasting your time, just take the JETT bus!
Now another problem occurred: Whereas the JETT bus drops you off at the entrance of the Petra archaeological site, the local bus just stops in the city of Petra nearby. It’s too far to walk, so I had to take another taxi for 4 JOD, which in fact makes the whole trip more expensive than taking the touristy bus. 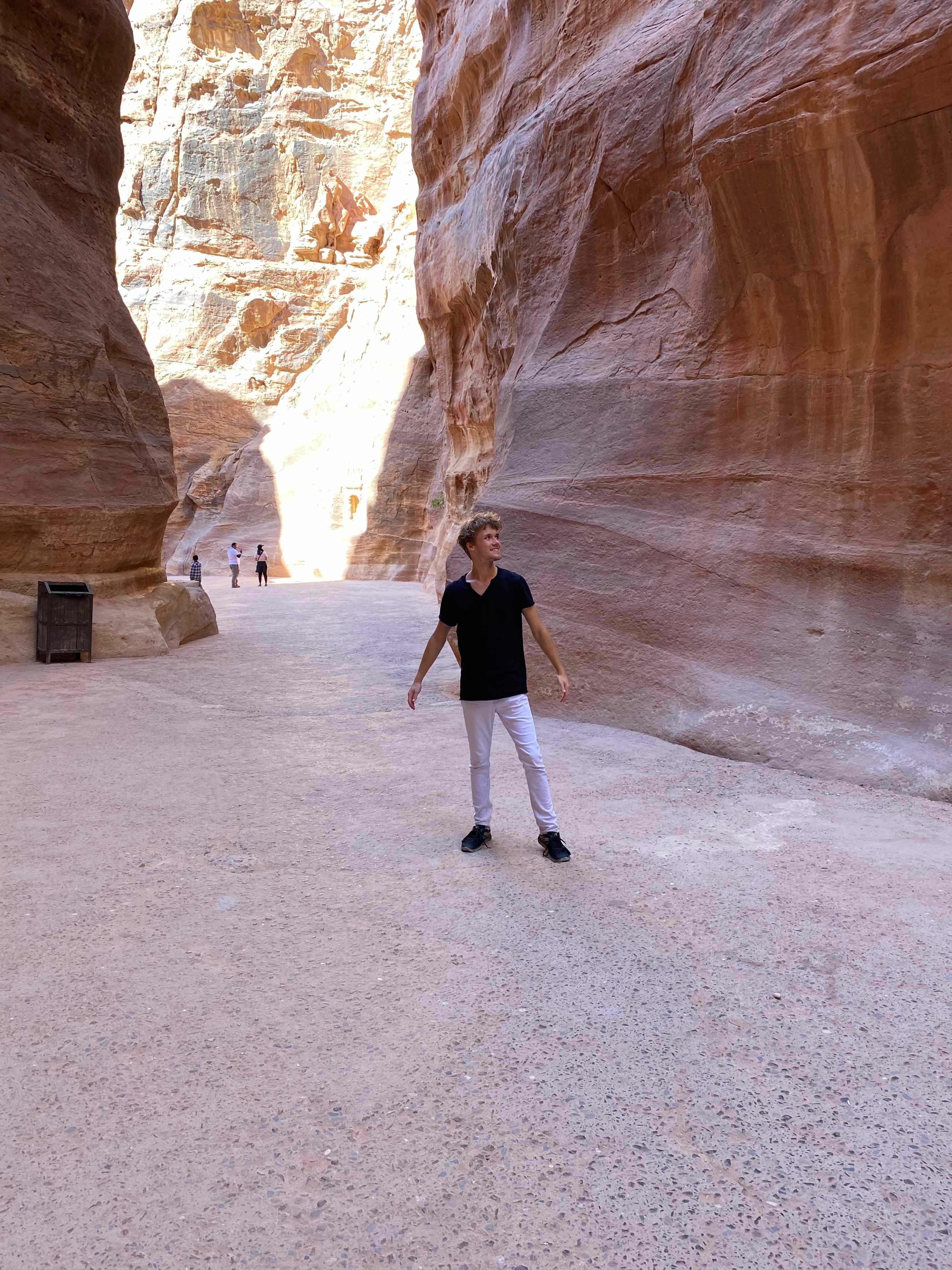 I arrived to Petra at 14:00 and had around 5 hours on site. First of all, Petra is expensive! For a single day ticket, the entrance fee is 50 JOD (or around $70). By far the most I have ever spent on a tourist attraction. I mean come on: Even a ticket for the London eye costs only about half as much. But in Jordan, you can get a kebab for $0,40 while the UK’s kebab prices – especially in London – will be over 10x as much. In other words, Petra is completely (COMPLETELY!!) out of proportion to the “normal prices” in Jordan.

Anyway. So in Petra, you first have to walk for about 1,5 hours to arrive at the Instagram place you all know. However, along the way you will find a lot of beautiful spots for pictures. Don’t fall for the trap of taking a horse or a donkey at the entrance. Yes, it is “included” in the ticket price, but at the end of the ride, they will ask for nifty tips of up to 10 JOD. Secondly, the horse/donkey will only take you about half the way to the actual Monastery – the rest you have to walk anyway. And now I haven’t even touched on how the animals are treated. Just don’t take the ride. 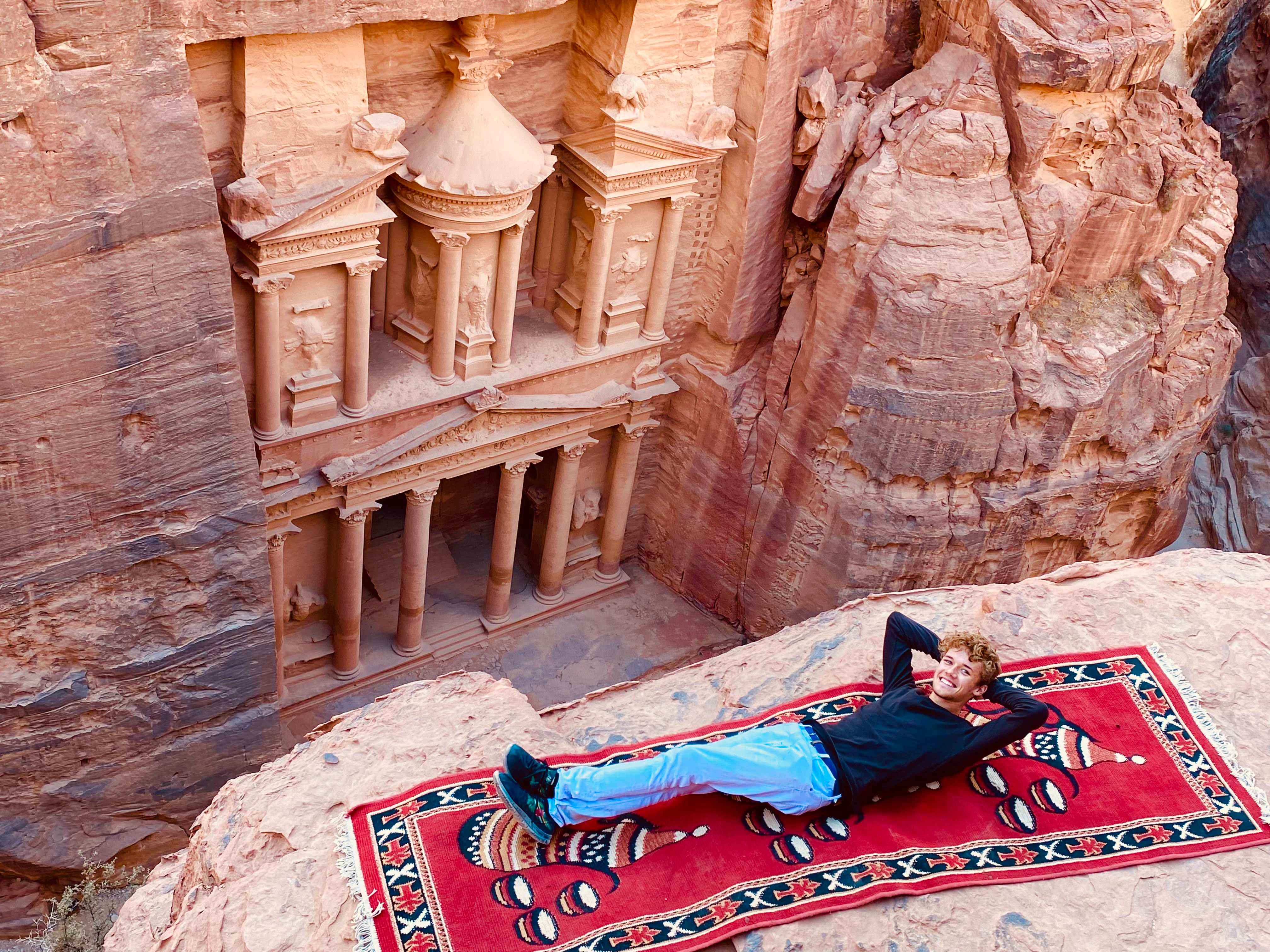 Now I want to make one thing clear. Petra is one of the most beautiful places I have ever been to in my life. The canyon is so stunning, it almost feels surreal. There are still not as many tourists as in pre-pandemic times which makes it easier to take awesome pictures and to enjoy the crazy scenery. But. Petra is not a relaxing place to visit. Don’t imagine wandering through the narrow canyon in peace and total harmony, feeling relaxed and at ease. No no no! First of all, you will sweat in the hot temperatures of the Jordanian desert. You should not wear shorts out of respect to the Jordanian culture although tourists do kinda have the privilege to do so, as Jordan is so dependent on the tourism industry. But you would get weird looks and people sometimes even tell you not to wear short skirts, tops etc.. This by the way applies to men as well. Despite the climate, the bigger problem in Petra will be the hundreds of local bedouin people that will try to “show you the view”, “take you to the top”, “take pictures” or “take you on a donkey ride” – of course for a tip. My recommendation: Do the view (the “view” and the “top” are the same thing) but DON’T PAY MORE THAN 3-5 JOD. I saw people paying 20 JOD for the 15 minute hike to the top. It is a very beautiful place and great to take pictures. Keep in mind that the hike is not the easiest and not very secure either. I am 20 and physically fit, but some parts were a little challenging even for me. On the way, my guide offered me gay sex which felt surreal and strange. As I am not gay, I politely declined and we continued. Just don’t be fooled by the culture that all people have a conservative mindset. Especially the young generation doesn’t like the restrictions and you see more girls in Amman nowadays wearing skirts and shorts – at least in the hipster neighbourhoods.

Try to ignore the people that want to take you somewhere all the time. It’s super annoying and to be quite honest, it ruins the magic of Petra a bit.


As in many parts of the world, you are just seen as a money-bag or, in rarer cases, a possible sex partner… Again, ignore the people as much as possible. They will try to make you memorise their names so THEY will be the ones who take you to the top etc.. Try not to start a conversation, otherwise they follow you all the time. Also, ask other tourists for photos. They will not charge you. That being said, you can expect decent pictures from the locals, as they know the best spots, settings and angles, especially on iPhones. I took some pics with my guide who took me to the top and he did not charge me for the pictures. (Maybe he hoped for something else in return?!)

As for leaving Petra, I was lucky enough to hop on another tourists rental car to Aqaba in the South of Jordan. There is no bus station and other than the JETT bus at 5pm, there are no busses leaving from the site. You can try to connect with some other tourists as a lot of them have their own rental cars and are heading towards either Amman or Aqaba.

As little summary of how I would visit Petra: Take the JETT bus at 6:30, spend 5-6 hours on site and take the JETT bus back to Amman, as it is your safest option. Ignore offers from sellers on site, don’t ride the donkey, don’t fall for expensive guides, ask other tourists for pictures and try not to wear anything too short. Bring some water, leave your luggage in the hotel (THERE ARE NO LOCKERS IN PETRA!!!) and hiking certain trails can be a bit challenging, especially with a bigger bag back.

Thank you for reading! If you enjoyed the blog post, consider following me on Instagram @thegermantravelguy for travel updates :)